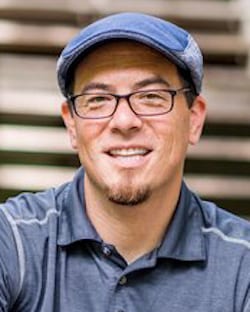 Scott Arizala is one of the leading experts and premier trainers on kids, staff, and the experience of summer camp. He earned his B.A. from Ithaca College, with a double major in Psychology and Sociology with a concentration in Gender Studies. He has been involved with camps and youth development for over thirty years as a camper, counselor, administrator, teacher, and consultant.

Scott grew up at Camp Al-Gon-Quian in Northern Michigan where he spent 18 summers going from the youngest camper to the director. He went on to direct traditional resident camps, day camps, and single gender camps.

Scott currently serves as a professional in several capacities. He is the Founder & Chairman of Chasing Summer, an organization dedicated to creating access for people with autism to summer camp, recreation, and education. He is the Founder of Camp Stomping Ground, a camp focusing on radical empathy and child freedom. And he is the National Consultant for Camp Kesem, a student-run, a national organization delivering camp to over 8000 kids who have been affected by a parents’ cancer.

Scott is also the proud partner of Bioverativ, delivering the Camp Academy staff training program to camps for kids with bleeding disorders and has trained with other major associations including the American Camp Association, YMCA, Girl Scouts, Campfire, the International Association of Burn Camps, the Children’s Oncology Camp Association International, the Diabetes Education & Camp Association, Western Alliance for Independent Camps, and many more.

Scott is an internationally recognized professional speaker, educator, and trainer, and has given keynotes, workshops, seminars and educational sessions at hundreds of professional conferences, training events, and with organizations. He is currently the CEO of The Camp Counselor, and one of the most sought after consultants and trainers working with hundreds of camps and thousands of staff & administrators across the world.

Scott has published articles in trade journals and on various industry websites and is a pioneering faculty member of Expert Online Training.  He is the award-winning author of the best-selling book on summer camp and youth development, S’more Than Camp, and a contributing editor of Happiness, Diversity & Autism: Practical Strategies for Inclusion.

Scott lives in Michigan with his wife, Karin, and their three kids, Linnea, Desmond, and Griffin. Scott and Karin both grew up at Camp Al-Gon-Quian and got married in the assembly ring there in 2007. Karin has her PhD in counseling psychology and has worked as a staff psychologist at the University of Michigan, as National Mental Health Consultant for Camp Kesem, and as the Mental Health Coordinator for Dragonfly Forest. Karin currently has a private practice in Ann Arbor.