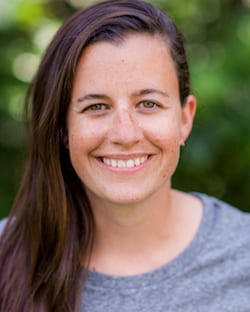 In 2009, Sarah earned the opportunity to become one of the youngest YMCA camp executives in the country, taking the helm of Ann Arbor YMCA Camp Al-Gon-Quian at the age of 23. She served as the director of Camp AGQ for nearly six years. During that time, the camp saw incredible growth, with a 40 percent increase in positive annual net for the program and nearly $1 million in capital construction improvements. Sarah’s dynamic and creative leadership approach took an already great camp to another level of excellence, receiving recognition at the national level for its success.

Sarah handed off Camp Al-Gon-Quian to her successor in 2015 to start Kurtz McKinnon Creative. Her goal was to help other camps and camp professionals reach their full potential. She recently co-authored a book for camp professionals with Steve Maguire, entitled Not the Way You Have Always Done It. She also co-founded, with Jack Schott, The Summer Camp Society, a collaborative, community-based education program for emerging camp professionals.

In 2018, Sarah earned her Master’s in Business Administration from the Ross School of Business at the University of Michigan, where she served as a fellow in the +LAB at the Center for Positive Organizations. Currently, Sarah serves as a volunteer board member for the Washtenaw Camp Placement Association, a local non-profit that sends kids to camp who otherwise would never have the opportunity. She also serves as the director of the Siblings Program at Camp Tall Tree.